You are here: Home / *BLOG / business / FC Inter Milan is a Club to Go Blockchain With Fantasy Football Game

Sorare is not only an incredibly addicting game for any football fan but also a platform for profitable investments and making money. You can buy cards of real football players and also resell them or participate in special tournaments, winning very valuable prizes. Today,  cards of real football players from 126 clubs worldwide are available in Sorare. There are also such famous clubs as Liverpool, Real Madrid, Valencia, Shakhtar Donetsk, Atletico, PSG, Lazio, Roma, Juventus, Napoli, and Inter Milan since recently.

There is no doubt that it will become the №1 game in the world of football. Like bitcoin cryptocurrency casinos available nowadays, Sorare is rapidly developing and every new month the number of players increases in arithmetic progression. How does it work and how to win money in it? Read in the post.

Sorare is a fantasy football game where fans can exchange collectible digital blockchain images of football players, create their own teams and receive rewards every week. Fantasy managers are ranked based on the performance of their players on the field and bonus points associated with the value of their blockchain images. Players can win weekly prizes in global tournaments. The winnings depend on the rarity of the images included in the squad, as well as the actual performance of the selected players this week. For more you can also check this site

There are two ways to make money in Sorare:

Prizes for first place in lower-division tournaments usually range from $150 to $500. The more difficult the tournament, the greater the reward. The maximum reward for first place in the coolest tournament for today is about $4,500. Also, those who take the first 135 places in tournaments win random game cards that can be sold in the future. The cost of cards that can be won in simple tournaments starts from $30-50 and can reach several hundred or even thousand dollars. So, your cards can participate in tournaments and be on sale at the same time. The choice of how to use your cards is entirely yours. 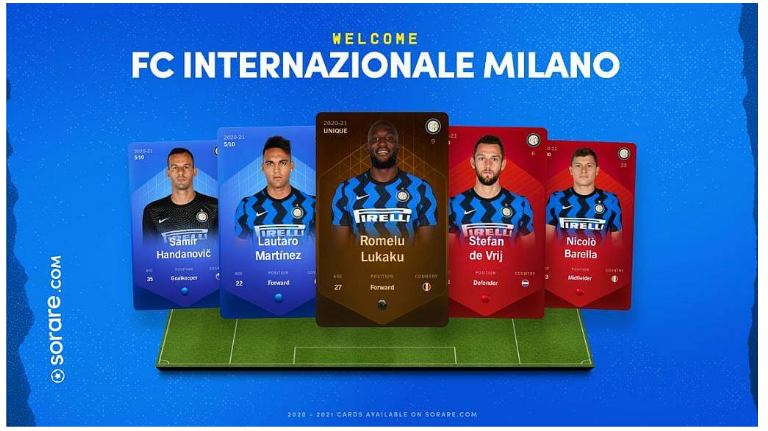 Italy is the number two country by the time spent in Sorare. Accordingly, the most distinctive Italian football clubs have already joined it. Inter Milan was the fifth Italian football club that has decided to join this rapidly-developing fantasy game. For every Inter player available for sale in Sorare, there will be free, rare, and super rare images and one unique image. The super rare and unique images are interesting because they are hard-to-find digital collectibles thanks to blockchain technology. To get one of them, you need to purchase them at the auction on the Sorare platform. The more unique the image, the more expensive it is.

Images of Inter players can be bought for Etherium and/or real money. Depending on the level of the game, as well as the number of previous victories, the reward can be either in cryptocurrency or super rare images of players. More information is available on the Sorare official website.