NEXT GENERATION MAPPING – SAVING TIME IN CONSTRUCTION SURVEYING WITH DRONES

The European highway network stretches across 80,000 km and multiple countries. In 2017, Germany ranked second in Europe and forth globally with 12,996 km of highways, making Germany a main transit country for millions of passenger cars and trucks on their way to destinations in Eastern or Southern Europe, creating heavy stress on the existing structures.

The German Federal Ministry of Transport conducted a comprehensive analysis of the expected traffic increase from 2010 until 2030, calculating a rise in passenger-kilometers by 12% and ton-kilometers by 38%.Concluding that there is a critical need for a renewal and extension of the German transportation network, the Ministry recommended a € 270 billion public investment by 2030 in its Federal Transport Infrastructure Plan. Nearly 75% of the investment is meant to cover the renewal and extension of highways and federal roads1.

To match the growing demand for improved transportation infrastructure, teams have looked towards new technologies to increase efficiency. Throughout that process, many contractors have put drones to use on site to create regular site maps and conduct surveying missions faster.

Executing the Ministry’s plan is a challenging venture that requires long term planning and coordination of private sector firms and specialists to complete these large scale roadwork construction projects.

STRABAG SE, Europe’s sixth largest construction group, and its German subsidiary STRABAG AG are major players in transport infrastructure construction, which accounts for 37% of STRABAGs output volume. With over 100 years of experience and 70,000+ employees globally, STRABAG has deserved its top market position for good reasons. One is staying ahead on technological innovation.

The STRABAG teams work in parallel on 9,100 construction projects across Europe, with 4,900 of them in Germany. Together, these projects add up to 600 km of highways being constructed or renovated, requiring efficient workflows and communication to keep these projects on time and within budget. Therefore, accurate and precise terrain planning plays a crucial role in managing and ensuring quality of construction projects. 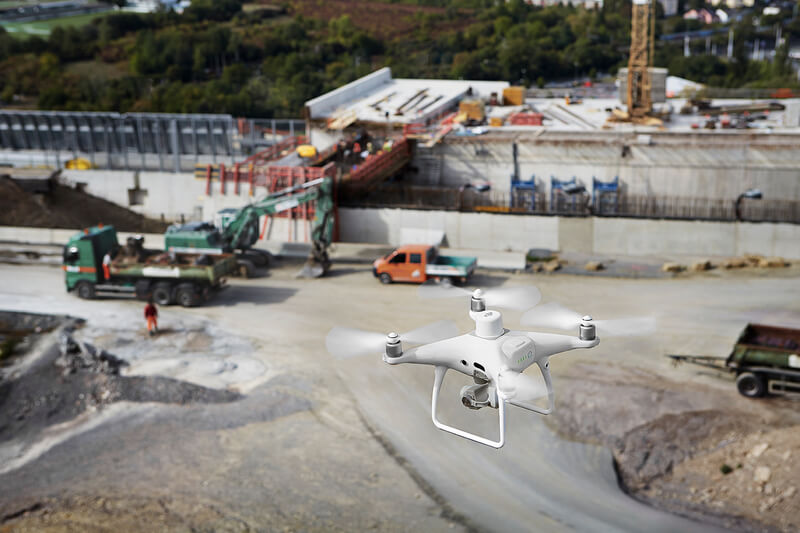 The Digital Object Survey and UAV STRABAG business unit has deployed drones for both internal and external clients to map projects while saving time and costs since 2015. As this technology has been deployed for a growing number of clients, new applications have arisen that demand high accuracy. To address these accuracy needs, STRABAG has added the new Phantom 4 RTK to their surveyors’ toolbox.

The construction of Germany’s A3 highway near the city of Würzburg is one of STRABAG’s current long-term projects. Beginning in 2014 and expected to be completed in 2021, STRABAG is extending the highway from two to three lanes, constructing a new tunnel for soundproofing and replacing a deteriorated bridge, and more2. These improvements are being implemented across multiple kilometers of the highway, over complex terrain with steep slopes and numerous bends. With a large-scale project like Würzburg taking many years, efficient surveying of the site is a high priority for the STRABAG team, enabling them to plan and track progress accurately.

“The use of drones for construction mapping has a lot of advantages. Their integration changes our workflow and simplifies many operational steps. Conventional surveying methods do deliver 3D models as well, but digital terrain models created from drone data provide a higher point density, and therefore reality is portrayed in much higher detail,” says Thomas Gröninger, Head of Business Unit Digital Object Survey and UAV at STRABAG.