Australians can now discover the impact of cancer in their suburb or town, with the launch of a new cutting-edge Australian Cancer Atlas.

The interactive digital cancer atlas shows national patterns in cancer incidence and survival rates based on where people live for 20 of the most common cancers in Australia — such as lung, breast and bowel cancer — likely reflecting the characteristics, lifestyles and access to health services in the area.

This world-leading project, led by researchers from Cancer Council Queensland, Queensland University of Technology (QUT) and FrontierSI, will give health agencies and policy makers a better understanding of geographic disparities and health requirements across the country.

“This project builds on years of work by Cancer Council Queensland to better understand the cancer divide between metropolitan and rural areas, and map the gaps linked to socio-economic status and other demographic factors,” Ms McMillan said.

“In 2018, an estimated 138,000 Australians will be diagnosed with cancer, but we know that some people face greater risks of diagnosis and death than others, due to a mix of lifestyle, behaviour, genetics and other unknown factors.

“The atlas enables readers to easily visualise those differences and offers critical insight into patterns of cancer and outcomes in Australia, depending on where people live, which can be used to drive research and policies going forward.” 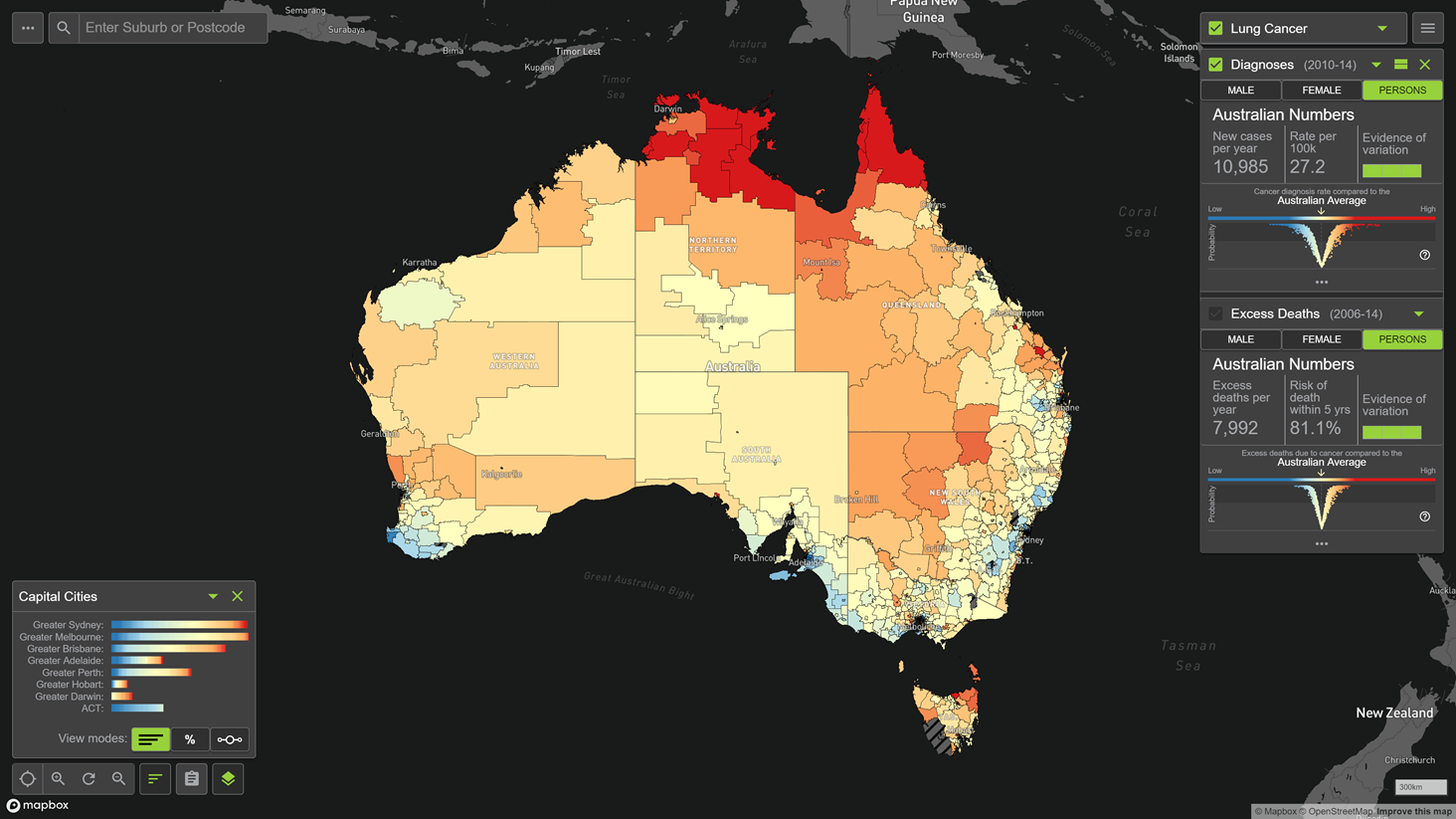 Cancer Council Queensland Head of Research, Professor Joanne Aitken, said the digital atlas highlighted which geographical areas had cancer rates below or above the national average.

“Australians can filter down to look at the impact of various types of cancer in the region where they live, to understand cancer patterns across the country. However, it’s important to remember that local cancer trends won’t necessarily reflect your own cancer risk,” Prof. Aitken said.

“Cancer rates vary across geographic regions depending on things like the age of local residents, participation in screening programs and trends in terms of cancer risk behaviours.

“Regardless of what is happening in our local area — we should each feel empowered to reduce our cancer risk by not smoking, being SunSmart, maintaining a healthy weight, reducing alcohol intake, exercising regularly, eating a healthy diet and getting checked.

“One of the most revealing patterns in the atlas was the severe disparities in Australia with liver cancer, with incidence rates significantly higher than the national average in many areas in Northern Australia and many metropolitan areas of Sydney and Melbourne, due to differences in the distribution of known risk factors such as hepatitis, intravenous drugs use and excess alcohol consumption.

“In addition, other findings confirm that melanoma incidence rates are higher than the Australian average in many areas of Queensland and northern New South Wales.”

“There is still a long way to go to understand the reasons for all the geographic disparities but the atlas is designed to motivate and accelerate the pace of targetted research in areas that need it the most,” he said.

The online atlas is powered by myGlobe, a state-of-the-art digital system that has been developed and enhanced specifically for the atlas by the Visualisation and eResearch team at QUT.

Distinguished Professor of Statistics at QUT and Deputy Director of the ARC Centre of Excellence for Mathematical and Statistical Frontiers (ACEMS), Professor Kerrie Mengersen said the atlas was designed to be user-friendly, with robust information and innovative visual presentations to help people interpret and understand the statistics.

“It can be added to and updated regularly so that all Australians can have access to the latest available information,” Prof. Mengersen said.

“This project has been an exciting and rewarding one to work on, to build statistical models from the registry data gathered and to present this information in an easy-to-navigate, interactive tool.

“We believe the atlas will be an important resource, of benefit to all Australians, and hope it will drive policy and research so that we eliminate disparities across Australia in levels of cancer care, resourcing and survival.”

FrontierSI CEO Dr Graeme Kernich said the atlas has been a tremendous success story in bringing together Cancer Council registries, universities, health departments and the Australian Institute of Health and Welfare to deliver an exceptional resource.

“This was an Australia-wide project linking different data sets to simply and seamlessly visualise the effects of cancer on our population through a spatial lens,” Dr Kernich said.

“It is promising for many areas of our digital economy just how well the team traversed the intersection of government and academia to deliver such an important piece of infrastructure.

“The online atlas visually tells a complex story, simply, for anyone to explore.”

The Australian Cancer Atlas is a collaborative project developed by statisticians, cancer researchers, visualisation experts and IT specialists from Cancer Council Queensland, QUT, FrontierSI and representatives from the Australian Institute of Health and Welfare, with additional input from government, community members, consumers and the media. The atlas has been endorsed by the Australasian Association of Cancer Registries and Cancer Council Australia, and investigators access expertise from the Australian Research Council (ARC) Centre of Excellence for Mathematical and Statistical Frontiers (ACEMS).

Australians can use the Australian Cancer Atlas at: atlas.cancer.org.au.