As GIS Users we know GIS has amazing power. I have written about how it has the ability to enhance marketing efforts, do good things for the environment by helping us track light pollution, and even use the past to inform the present.

GIS can also help solve mysteries. The story of this one started over a century ago, and culminated nearly 40 years ago, when a small museum in Northern Idaho lost Jesus. Ever since, many people have tried to find him. Several theories have been put forth of just where he might have gone.

Thanks to advances in technology, we can find him with the help of GIS and Ground Penetrating Radar. First, a quick review the story of where Jesus came from.

The Birth of Jesus

The weekend of August 19-21, 1910, one of the largest wildfires in US History burned over 3 million acres from eastern Washington state through Idaho, Montana, and into Canada. One third of the town of Wallace, Idaho was destroyed.

Providence Hospital, on the east end of Wallace, was threatened by the fire. Sister Anthony, the hospital’s supervisor, was visiting Missoula during the fire. When she heard about the hospital, she prayed and promised to erect a statue of Christ if the hospital and its patients and staff were spared. As she finished praying, the wind shifted and the hospital was spared. A miracle.

When the fire and the subsequent cleanup were over, Sister Anthony kept her word, and a life-sized statue of Jesus of the Sacred Heart was erected on the hospital grounds.

The Disappearance of Jesus

The Sacred Heart was a large, metal statue of Jesus, and thereafter one of the prominent features of Providence Hospital. By the late 1960’s the church was short on funding, the local economy weakened, and so the hospital closed in 1968, its artifacts removed and scattered to various locations. Unfortunately, between the time of the hospital’s closure and the subsequent purchase of the land by a private individual, some vandalism occurred. One local Catholic family, the Votolini’s moved one of the statues from the Hospital grotto to the area where their family was buried in Nine Mile Cemetery north of town.

The Sacred Heart was knocked over, it’s left hand missing, and its nose broken. A local police officer saw the statue lying on its side and with the help of a couple of others picked it up and took it to the police station, where it remained for some time.

Stories conflict as to actually when, but at some point in the mid-70’s it was decided the statue should be donated to a local museum, and so it was moved to the Wallace District MIning Museum.

With no funding to restore the statue or an appropriate place to display it, the museum put it in storage. Sometime in the mid-80’s, the storage area was being cleaned out, and the museum staff temporarily put the statue of the Sacred Heart in the alley behind the museum, intending to return it to the storeroom once it had been cleaned.

But one morning they arrived to find Jesus had disappeared. Without the tools of modern forensic science, the investigation was short and yielded no real results. The statue has never been seen since.

Several theories surfaced over the years about what happened to Jesus. None seemed to quite fit, and locals who were asked about it denied any knowledge. Some things to keep in mind a out the statue:

Theory #1: Jesus went to someone’s house. Many thought the statue was removed and taken to the home of someone who wanted to restore and preserve it.

Theory #2: Jesus was melted and sold for scrap. This is a possible solution to the mystery but not a popular one.

Theory #3: Jesus went to the landfill. It’spossible, but not probable that the sanitation department thought the museum was throwing the statue away, and removed it with the rest of the trash.

When interest in the statue was renewed with the hundredth anniversary of the 1910 fire in 2010, some new facts came to light.

The Suspects and Means: Remember the Volotlini family, the one that moved the statue from the grotto to their family’s burial area in Nine Mile Cemetery? The Votolini brothers owned a landscaping and excavating company. One with heavy equipment and large trucks, just the kind you need to move a really heavy statue.

Some locals even suspected the brothers had something to do with the disappearance of Jesus, but when asked, the brothers only responded with secretive smiles.

The Motive: The boys came from a good Catholic family. They would want it to be forever preserved and kept out of anyone else’s hands.

The Location: Where would those mischievous boys have put Jesus where he would not be found, where only they could find and retrieve him? They had the equipment, the ability to move it and take it where they wished.

An interview with a local woman who wished to remain anonymous gave this astounding answer: Nine Mile Cemetery. “Those boys buried that statue in the cemetery. I just know it.”

Further investigation revealed the answer was plausible. Digging in the cemetery would not have been suspect, if done at the right time. The brothers had access, means, motive, and no real alibi.

How do we discover if this theory is true?

Fortunately, the cemetery has been mapped and “read.” So we know what graves are where.

A crude map has been drawn that can be laid over modern imagery. The cemetery reading lists exactly where each family’s section of plots is located. Using handheld GPS these areas can be more specifically mapped.

It makes sense that the Votilini brothers would have buried the Jesus near their own family plots. Mapping this area narrows the search area significantly. A small, circular area would need to be searched. How do you search an active cemetery established in 1885 for something possibly buried there over 30 years ago?

When seeking permission to search a cemetery, it’s much more easier to obtain consent to use technology than to just start digging. Due to its noninvasive nature, ground penetrating radar is often used for mapping old cemeteries and other sacred grounds where plot locations may not all be marked or where something else might be buried.

Is Jesus of the Sacred Heart buried in Nine-Mile Cemetery? The answer still remains unknown. There are a number of hurdles to overcome before we can be sure. But with the help of GIS and Ground Penetrating Radar, it’s possible the old statue could resurrected and restored.

We’re much closer than we have been to finding Jesus.

Troy Lambert is a freelance writer, editor, and non-profit consultant by day, and a suspense thriller author by night. He learned about the power of GIS while working as a researcher at a museum, and is always looking for ways to apply this technology and big data in new and innovative ways. Troy is an avid cyclist, skier, and hiker. He lives, works, and plays in Boise, Idaho. His work can be found at troylambertwrites.com, and you can connect with him on Twitter @tlambertwrites. 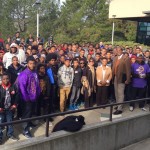