At the end of last year, FortiusOne rolled out new analytical capabilities for their GeoIQ platform (upon which GeoCommons is built) in a fun series of posts called the “12 Analytics of Christmas.” As 2011 kicks off, FortiusOne shows no signs of slowing down as they release a new capability aimed at improving the data visualization and cartographic capabilities of GeoIQ.

This new capability, which they have dubbed “acetate,” provides more fine-grained control over basemap layering and visualization. In previous versions of GeoIQ, you had the ability to choose from various basemaps which would lay under the data layers on your map. With acetate, you can now place reference features such as roads or place names in the draw order of your GeoIQ map in a way that makes sense for your visualization. Additionally, you get some control over the cartographic representation of these features (such as opacity). Some aspects of acetate are still basic but I am sure FortiusOne will be adding more advanced features over time.

Acetate basemaps use OpenStreetMap. They load OSM tiles which serve as the underpinning of your map and also layers of reference features (currently just place names and roads) drawn from OSM. These reference layers can be moved up and down in the draw order. For an example, here is a simple map I created that shows place names on top of a layer showing change in diabetes estimates from 2004 to 2008. This is a very simple change but it makes the map much more effective, in my opinion.

Acetate represents a collaboration between FortiusOne and Stamen Design and the styles and tools have been made available as open-source. They are available at the GeoIQ developer site. 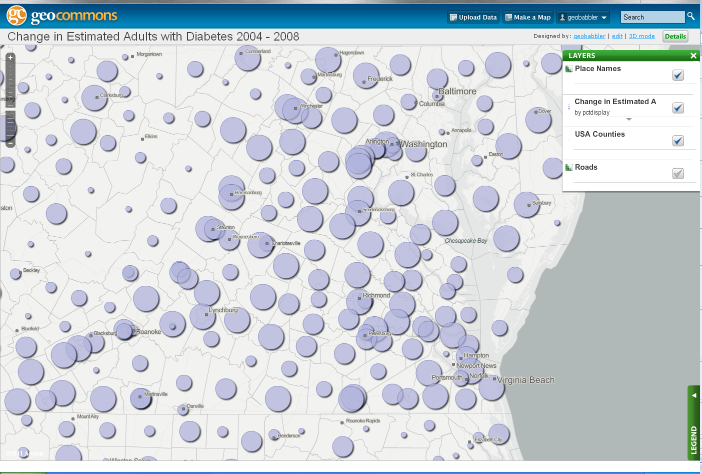 This new capability is a nice complement to the analytical tools introduced into GeoIQ last year. It also moves a step closer to developing a “closed loop” of data management, analysis and visualization completely within a cloud-based environment.

Bill Dollins has been a Sr. Vice President and Partner at Zekiah Technologies in Maryland since 2001 and has been developing GIS applications since 1993. He is a programmer with diverse experience in geospatial information systems, relational databases, and application development. Follow Bill on Twitter @billdollins