The China Data Center of University of Michigan has released two new atlases about China:

The New Release of "The Atlas of Religions in China"
The China Data Center is pleased to release "The Atlas of Religions in China".  This GIS based data product (in Shape file format) has integrated those official religious data from the 2004 China Economic Census and the ZIP maps of Mainland China. The atlas provides a total of about 70,000 religious sites (Buddhism, Taoism, Christianity, Muslim, and others) on Mainland China. Each site includes site name, address, contact information, County GB Code, postcode, starting year, primary activities, and employee scale.
The New Publication of “The Atlas of Changes in Population and Environment in China"
Co-Sponsored by the Chinese Academy of Sciences, the Institute for China and Global Environmental Sustainability, the University of Michigan China Data Center, and some other institutions, “The Atlas of Changes in Population and Environment in China” has now been published in Chinese by the Science Press in China. The atlas is available in hard copy (4K size). It provides comprehensive information of the spatial distribution of and changes in population and environment in China within last 60 years. The atlas consists of 196 maps in fourteen groups: including changes in regional population scale, structure, and quality; land resource and land use changes; solid wastes and industrial discharges; fresh waters, ocean and water pollution; forests, grasslands, wetland, and bio-diversity; carbon sequestration and carbon sinks of ecosystem; climate changes and disasters; atmosphere and air pollution. 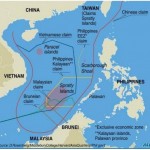